In honor of reaching the cute baby bump stage (6 months) of our pregnancy, I’m sharing some fun facts about the journey this far.

How I found out I was pregnant: Sam and I always planned on starting a  family early but early to us meant to start trying after about a year of marriage. God had very different plans for us and our family! I was at work when I decided to that a pregnancy test (on a whim) because I felt “different”. The line was so faint that I almost didn’t believe it was real. I rushed out and bought a few more before calling Sam. I think we both were in a state of shock, excited but…bewildered to say the least.

Best part of the first trimester: Telling family. We told our family at about 7 weeks and then started telling friends around 3 months. This is the first grandchild of both families and they are SO excited. This is going to be one spoiled baby.

Worst part of the first trimester: Tiredness. It hit me like a ton of bricks where my life became a continuous loop of sleep, work, sleep.

Cravings so far: First trimester it was bagels, sandwiches on big fluffy bread, and mozzarella sticks. I don’t really consider chocolate a new craving because I could eat it for breakfast, lunch and dinner before pregnancy too. Second trimester so far has been pretty mellow. I did find a new love for California rolls though!

Sam and I are so excited for our little nugget to make their debut, but we have so much stuff to do before then it is a little overwhelming. Sam and I couldn’t find a crib that we loved that wasn’t outrageously expensive…so we made our own! (Sam did most of the work.) I will share our progress on that DIY project in the next post. Preview picture below! 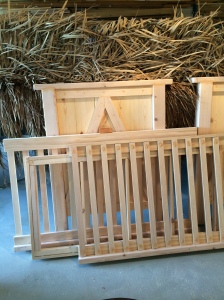 PS. Did you see that Jessa and Ben Seewald from 18 kids and counting are pregnant also? Due November 1st. Sam and I like to joke that we beat them to the punch. Not sure if that is a good thing though ha!